For the second time since the start of the Syrian Civil War, a reconnaissance aircraft was shot down over the Mediterranean by the Syrian air defences this week. However, unlike the last time when it was a Turkish RF-4E Phantom, this time it was Russian Il-20M (NATO codename ‘COOT-A’) which was brought down. The friendly fire incident caused quite a stir, and the fallout is yet to settle. 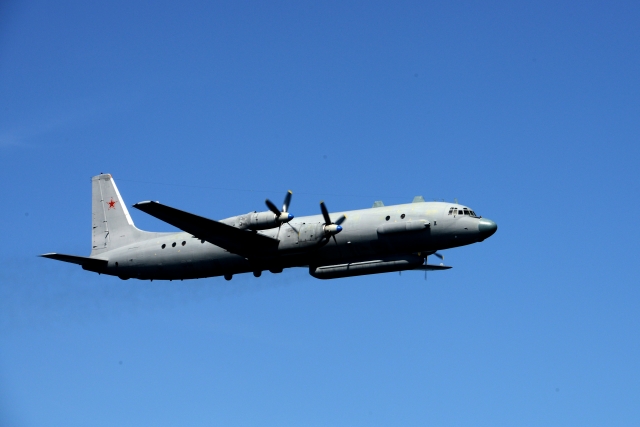 An Il-20M similar to the aircraft downed in Syria, here photographed when it kept an eye on western ships during exercise BALTOPS 14. Source: PO(Phot) Si Ethell/MOD via Wikimedia Commons

The loss of the Il-20 is by far the most serious aircraft loss suffered by the Russian forces in Syria. This is regarding both the highly specialised aircraft as well as the large crew of intelligence specialists (likely 10 out of 15 killed). The single Il-20 arrived at the very beginning of the Russian operation in Syria. The exact mission in Syria is unclear, but likely includes eavesdropping on enemy ground forces as well as signal gathering from NATO ships in the Med and unfriendly air assets in Syria. It seems a single Il-20 has been on strength throughout the operation. It was e.g. caught on satellite pictures back in March 2017, and is visible on Google Maps.

However, recently a total of three similarly looking aircraft has been spotted at the base, though these likely include the Il-38 (NATO codename ‘MAY’) anti-submarine aircraft which have been deployed to Khmeimim, and are based on the same Il-18 passenger aircraft. Much have been made of the fact that the Il-20 is based on an airliner that first flew in 1957, making it an ancient design by aircraft standards. However, it should be noted that this is not rare when it comes to larger specialised airframes, with the corresponding US type, the P-3 Orion, being based on the Lockheed L-188 Electra which first flew the same year. The C-135 family still in widespread western use is based on the Boeing 707, which made its debut the following year.

The exact target of the Israeli raid is unclear. Israel has earlier indicated that there is an Iranian missile factory being built in Baniyas, around 30 km south of Khmeimim. Iranian long-range weapon systems, including rockets as well as surface-to-surface and anti-ship missiles, have always been one of Israel’s prime worries, and the transfer of these to Hezbollah has been a policy red-line. It now seems that Israel suspected Iran of dismantling the whole or parts of the production line in Baniyas and shipping it to Hezbollah. Israel has not made any further details public, but the Russian MoD in their presentation of the raid stated that four Israeli F-16 approached at low level, used the Il-20M as cover, and released GBU-39’s at three different targets, including a military base, a fuel depot, and an aluminium plant. A Syrian S-200 battery then shot down the Il-20M while trying to hit the F-16s (or the GBU-39s).

It is quite clear that not all factors add up in the Russian story. The GBU-39 is an unpowered glide-bomb, also known as the SDB for Small-Diameter Bomb. This means that the range is highly dependent on the altitude at which the weapon is released, meaning an Israeli low-level raid would have had to get very close to the target, largely defeating the idea of using the GBU-39 with its pop-out wings. It also seems that a single target, a large warehouse in Latakia, was hit by the raid. Interestingly, this was the same modus operandi used by Israel in a raid that leveled a warehouse close to Aleppo airport in July (the weapon was identified by pieces left behind). The GBU-39 packs a small warhead, and is generally not used against buildings. However, the small diameter of the weapons allow large numbers to be carried by a single aircraft, enabling this Israeli ‘death by papercuts’-approach. As such, it is entirely possible that the Russians identified the weapon used correctly (either based on the number of weapons released or by pieces found in the ruins of the building hit).

With regards to the friendly fire incident, it is highly unlikely that the Israeli fighters would have ‘masked’ behind the aircraft in any meaningful way. To begin with it would have brought the Israeli aircraft closer to the Syrian air defences, and it would also have put the Russian aircraft at risk, something which Israel has so far been unwilling to do due to political considerations. It is also notable that the S-200 is a semi-active radar-homing system, meaning that it will only home in on a target that is locked by the 5N62-radar. As such, this was not a case of a runaway missile switching target after launch, but of the Syrian crew misidentifying the Il-20M. They hit what they aimed for, they simply aimed at the wrong aircraft. Crucially, Russian MoD has afterwards stated that Syrian forces doesn’t have access to IFF-equipment to identify Russian aircrafts as own forces. Once the Il-20 was lit up by the 5N62 it stood no chance, as the aircraft completely lack self-defence equipment. A modernised version designated Il-20MS has been in the works for a few years, and feature both UV-missile approach warning and decoy launchers. However, the program does not seem to have moved beyond a single prototype, leaving the operational Il-20M defenceless.

The Russian reaction was interesting. The first suspect was the French frigate Auvergne (D654) which would have fired a missile in the area at the time. Then it was changed to that the Auvergne had fired a cruise missile (France has sternly denied the Auvergne releasing any kind of weapon at the time), which had confused the Syrian air defence crew. Then the Russian MoD came out all guns firing, and declared that while it was a Syrian S-200 that brought the plane down, it was the reckless and calculated Israeli provocation that placed the Il-20 in the lane of fire. Russia would also respond in force.

Granted, from the outset it is clear that Russia would not respond in force to the “Israeli aggression”. Russia is very much playing the away-game if they would launch raids on Israeli targets, and while the small force of jets assembled in Syria together with naval assets and the long-range bomber force is plenty enough to make an impression on any Syrian rebels, the Israelis vastly outnumber them in the region. The Israeli Air Force is also on another level when it comes to quality, both regarding aircrafts, support, and training, and while things definitely would get ugly, there’s little doubt that it would end with a serious Russian defeat. Luckily for all involved, neither Putin nor Netanyahu was interested in escalating the whole thing, and crucially Putin shifted the Russian narrative to describe the situation as a series of unfortunate events leading to the accident. The very active Israeli communication, including the Israeli Air Force CinC major general Nokin visiting Moscow to present a report on the Israeli findings, is contrasted to what seems like a very low-key and late Syrian response to get their version of events out. All in all, it does seem like the risk for further Israeli-Russian escalation is low for the time being.

The big question is what happens now? Putin indicated that he would respond by strong measures to ensure better protection of the Russian servicemen in Syria. It isn’t hard to envision this including the deployment of further Russian SAM-batteries, though truth be told when it is your allies that are the greatest threat it naturally won’t do much good. The Syrian air defences, especially those in areas where Russian aircrafts regularly operate, will likely come under closer Russian command, something which likely won’t be appreciated by Damascus or the Syrian forces. Syria could potentially use the incident to renew requests for delivery of more modern air defence systems, as the more modern user interface of a system like the S-300 would likely significantly reduce the risk of blue-on-blue incidents. However, I have not seen any indication that this would happen, and considering that Putin seems to more or less agree with the Israeli narrative this is unlikely to happen.

If Russia chooses to up their game, one possible way to communicate intent would be to send the modern Tu-214R to Syria as a replacement. This would signal determination without escalating things. The aircraft has made a short visit to the region earlier, and nothing says it couldn’t come back. The major issue is that while the number of operational Il-20M is likely down to single digits following this, there are a grand total of two Tu-214R in service. Another option is the earlier mentioned Il-20MS prototype, which would offer continued ELINT/SIGINT operations with a level of protection.

One thought on “The Unlucky COOT”