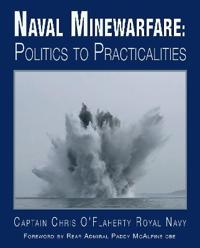 On some reading list during the closing months of 2020, can’t honestly remember which, a rather plain-looking book titled “Naval Minewarfare: Politics to Practicalities” (ISBN: 9781789630862) was described along the lines of being the best single volume on modern naval minewarfare. The book was also noted as being self-published, meaning that the risk of it becoming sold out and unavailable was rather real. It wasn’t perhaps the book I was most enthusiastic about last year, let’s face it – 2020 meant a host of interesting books going through the printers, including titles such as Harrier 809, Operaatio Punainen Kettu, and The Secret Horsepower Race – but naval mines is one of my personal fields of interest, and one in which good books are hard to find. Better get this one while it’s still around, I thought.

Upon getting my hands on it my interest was piqued. To begin with it was quite a bit bigger than I had thought, both in surface area and page count (19 x 23.5  cm and 414 pages). But the text was also flowing quite a bit easier than I had expected from the rather academic look. As such it quickly and unexpectedly climbed it’s way to the top of my reading pile. The book claims to be “an outstanding primary reference for politicians through practitioners of both military and civilians elements of conflicts that involve naval mines.” A tall order, let’s see if it can live up to it.

Let us start by noting that Captain (N) Chris O’Flaherty is a military professional in the field, with a long career in the Royal Navy dealing with mine hunting and mine countermeasures in a number of different roles. The book stems from research done following his election as the Royal Navy’s Hudson Fellow at St Antony’s College of the University of Oxford, with proceeds of the book going back to the Guy Hudson Memorial Trust. A nice gesture on the part of the author!

The book starts with the basic definitions – chapter one dealing with “Naval Mines” (what is a mine, different types of mines, the purpose and characteristics of different kinds of minefields, …), chapter two dealing with “Naval Mine Countermeasures” (sweeping versus minehunting, self-protection devices, passive versus active MCM, offensive versus defensive MCM, …), before going on to the third chapter that deals with “Naval Mining Events Through History”. Here the key events up to the end of World War II are looked into, before transitioning on to looking at all twenty-four mining incidents post-WWII in detail, up to and including current events as part of the War in Yemen. Chapter four looks into “The Legality of Naval Minewarfare”, including both mining and mine countermeasures. Chapter five deals with the role of “The Strategy and Doctrine of the Minewarfare Battle”, while the sixth chapter lifts it up yet one level further by looking at “The Statecraft of Naval Minewarfare”. The seventh chapter then rounds things up with a discussion on “Measures of Effect”, before the books ends by going to conclusions and appendixes.

As can be seen from the chapter headings, the narrative builds up from the smallest parts (what kinds of mines and countermeasures are there?) up to the highest levels (how can a nation use mines or MCM efforts to achieve their goals?). A key point here is that the book focuses on explaining things at a general level. You won’t get much in the way of “which mines are found in the stockpiles of country X?”, but instead there is a focus on thoroughly explaining any concepts encountered. This means that the text ends up in some rather interesting places: as the book looks into the role of minewarfare in the greater strategic and diplomatic considerations of nation states it also include a thorough looks on naval theory and suasion, as well as one of the better two-page primers on different theories of international relations. As such, the book does not really require much in the way of pre-requisite knowledge.

As said minewarfare has certainly been an area of interest for me earlier as well. Still, the book is filled with new information. I had no idea about how poorly defined the legal frameworks surrounding naval minewarfare are, and of the 24 mining events since WWII there were quite a few that were new to me (“Patriotic Scuba Divers of America” claiming to have mined Sacramento River in 1980? Had no idea about that one!).

As noted, I was in many ways positively surprised by the book. It was an easy flowing, yet highly informative read, with ample of notes and references to guide the reader to where one can find further information. The way it continuously keeps building upon previous chapters in a pedagogical way that helps even a novice understand complex theories of the interplay between the naval domain and statecraft and the role of mines and MCM-efforts in these is honestly nothing short of remarkable.

Personally I have for the last few years had a few different scenarios in my mind for how naval mines could be employed in the Baltic Sea in case of war or as a tool of diplomacy below the threshold of war, and what any single one of these would mean for Finland. Having read the book, these have changed. Both regarding how dangerous the individual scenarios would be – some being worse than I earlier imagined, some less of a danger – but also my appreciation for the exact nature of these and how they could play into the greater political game surrounding any given crisis. As a defence analyst, finding a book that can inform one’s own estimate of the capabilities and alternative courses of action for different countries is always of great value. Besides being a solid buy for happy bloggers as myself, I would also highly recommend the book to anyone that might come into (figurative) contact with naval mines in one way or the other. This includes not only seafarers (civilian and military, with one of the appendixes being a practical guide for mariners about how to deal with the mine danger), but also people involved in politics and in the general national security debate. As noted, the book is self-published, so if you are interested in it I recommend you head over to your favourite bookstore and grab it while it is available (it is currently given as in-stock for many major web-based ones)!

One thought on “Review: Naval Minewarfare – Politics to Practicalities”