The classic three factors of mobility, firepower and protection are usually associated with AFV’s, but can naturally be employed for a variety of vehicles. With regards to small craft, much of the thinking behind land vehicles holds true, but the emphasize have always been on mobility and firepower instead of protection. “Speed is our armour”, but how good an armour is it really, and what difference does a few knots make?

Let’s compare three different military boats, which represent a comprehensive cross-section of the speeds naval crafts normally operates at. The first boat is the Linnakevene (or L100-series). The boat in question is a light water bus-type vessel, the primary mission being to ferry military personnel between naval bases in the archipelago and the Finnish mainland. The Linnakevene has a LOA of around 13 meters, and features a displacement hull. The speed is thus relatively low, at 13 kts (~24 km/h).

The second boat is the Jurmo-class landing craft (also known as the U600-series, Watercat M12, or, rarely, the Uisko 600-series). This is a relatively modern landing craft, featuring twin water jets and a semi-displacement hull, with the capability to ferry 25 marines to shore. LOA is 14 meters, and top speed is stated as over 30 kts (~55 km/h) on the homepages of the Finnish Defence Forces, with the manufacturer Marine Alutech promising “over 35 kts” (~65 km/h). We use the lower estimate here, as it fits nicely in between the other two boats.

The third class is the Super Dvora MKIII, a fast patrol craft of Israeli origin. The boat is the latest in line of the Dvora-series, and combines high speed with a relatively heavy armament and seakeeping abilities. The boat is longer than the other two, at 25 meters LOA, and faster as well, at 45 kts (~83 km/h).

Two of the boats are in frequent use by the Finnish Navy (although the Linnakevene is slowly nearing retirement), and represents the typical operational speeds of displacement and planning crafts respectively. The Dvora is chosen as it is one of the faster operational vessels around, and as such it gets to represent the whole upper side of the spectrum, including such diverse vessels as high-speed RIB’s and super-fast patrol and fast attack crafts.

As a side-note, the Norweigan Skjold-class of small corvettes currently holds the title as fastest operational armed vessel, with a top speed of roughly 60 kts (~110 km/h).

The most important way in which speed enhances direct combat survivability is the ability to move from cover to cover fast enough that the enemy does not have time to respond (i.e. before they sink your boat). However, understanding what practical difference the different top speeds means is not obvious at a glance.

To try and get a picture of what a Jurmo can do that a Linnakevene can’t, let’s create a very simple scenario: An enemy position is situated so that a boat passes on a perpendicular course, passing from behind one island to the next one. The simple question is, how long can the distance between the two islands be, so that our boat still survives?

Obviously there are a vast number of things that affect the outcome. What is the reaction time of the enemy? Are they standing ready to fire, or do they need to pick up their weapons and load them? What weapons are they using? Is it easier to hit a bigger target going faster, or a smaller going slower? How does the boat firing back change the reaction speed and accuracy? However, we only want to know what difference the differing speeds of the boats gives, so we will assume that the only thing that varies are the speeds themselves, ceteris paribus.

If a low state of readiness is assumed, an estimate is that it would take an infantryman about 30 seconds to 1) spot the boat, 2) react, 3) pull out/man the weapon, 4) ready the weapon, and 5) actually aim and fire an AT-rocket or guided missile. Naturally, this could be off by quite a bit in both directions, and on long distances the flight time alone could easily account for over a third of this value, but it will serve our purpose well enough as it provides a controlled “testing environment”.

A HMG will (usually) not sink a boat with a single hit, but it is generally quite fast to man and open fire with (assuming it is standing loaded at a tripod/pintle mount), and has a high rate of fire, so assuming 30 seconds from spotting to scoring enough hits to disable the boat should be within the realms of reality here too. 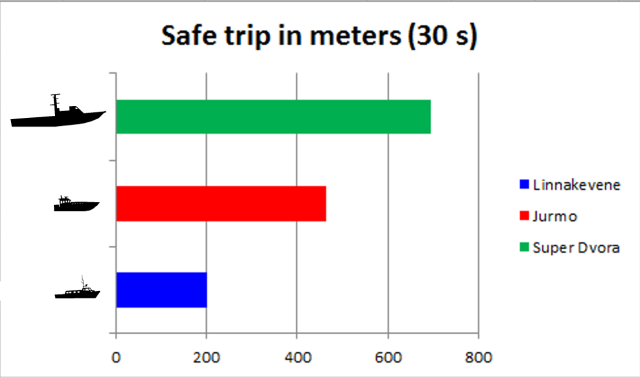 Thus, in the 30 second window of opportunity we have granted it, the Linnakevene can travel ~200 meters. Any longer distance between concealments, and the boat is at risk. Traveling at slightly more than double the speed, the Jurmo (naturally), also travels twice the length, and reaches over 460 meters in 30 seconds. In the meantime, the fast Super Dvora can almost reach 700 meters.

In practice, finding concealment with 200 meters in between is difficult even in the cluttered Finnish archipelago. Finding islands half a kilometer apart might just be doable, and even if this wouldn’t be possible, it still gives the Jurmo quite a lot less ground to cover compared to displacement crafts, which is why the navy likes to go fast.

This morning a headline proclaiming the deployment of frigates to the southern coast by the Indonesian navy in response to Australian intrusions caught my eye.

The background to this is the Australian Operation Sovereign Borders, an effort to “combat people smuggling and protect Australia’s borders.” The tougher Australian stance on asylum seekers have created headlines both at home and abroad, and in an effort to try turn home the asylum seekers and their boats as close to their departure destination as possible Royal Australian Navy and custom’s vessels now patrol close to the Indonesian shore.

The latest spat comes after the government on a press conference last Friday (17/1/2014) admitted to breaching the Indonesian territorial waters on five instances, and extended their apologies. The ships in question were both naval vessels and a custom’s ship.

Immigration Minister Scott Morrison told the reporters that they “deeply regret these events”, and that Julie Bishop, the Australian Foreign Minister, already had offered “an unqualified apology on behalf of the Australian government” to her Indonesian counterpart, adding that the Australian embassy in Jakarta would make a formal apology the very same day. However, he also maintained that all the breaches happened unintentionally, and in violation of Australian policy.

As stated earlier, the Indonesian reaction was anything but understanding, and by dispatching the largest surface combatants the navy have, one or several of the Ahmad Yani class frigates, to the scene of the intrusions, it has sent a sharp signal to the Australians not to repeat the violations.

However, the reasoning behind the sending of the frigates is rather uncertain. One of the Australian ships in the area was the ANZAC/MEKO 200-class HMAS Stuart (FFH 153), a 3 600 t (full load) frigate, and the most capable surface ships in Australian service. There might be a perceived need to match this ship, frigate to frigate. However, the Ahmad Yani-class are the last of the British Leander class ships left in service (being the ex-Dutch van Speijk-class). Although a highly capable and successful ship in the 1960’s, it is by now a dated design, and although the ships have been modernized, it is a far cry from its Australian counterparts. It is also a considerably smaller vessel, at just over 2 800 t (full load), and it is highly questionable whether the ship even can match the flank speed of the HMAS Stuart, if the Australians would find their possible escort to be unsettling.

A more logical step would have been to employ some of the ocean-going patrol vessels the Indonesian navy operates, or, if there is a perceived need for heavier armament, the fast attack crafts or corvettes that are of a decidedly more modern design than the frigates.

The point of the operation might well be to impress the Indonesian government and general population more than to deter the Australians. The Indonesian navy is in expansion, with the steel-cutting ceremony of the first new SIGMA 10514 PKR Frigate being held only last week, and the Indonesian defense minister expressing their interest in Club S armed Project 636 Improved Kilo-class submarines earlier this month. However, it has also suffered embarrassing setbacks, including its latest trimaran FAC KRI Klewang (625) catching fire and sinking in September 2012, less than a month after its launch. It is also unclear wether the Indonesian navy had noticed the intrusions, or if the Australian apology was the first sign of it. Getting the chance to show the usefulness of its heavier units, possibly with the opportunity to get some nice pictures of an Indonesian frigate escorting a RAN vessel close to the border, might just be the boost the navy’s reputation needs.