Prominent Swedish blogger Lars Wilderäng (Cornucopia?) made something of a splash amongst the Swedish defence community when he released his first novel Midvintermörker in 2011, widely hailed as the best Swedish techno-thriller since the Cold War. This was followed by the final part of the two-book series, before Wilderäng temporarily left near-future wars for other topics. Last year he finally returned to the battlefield with the book Höstsol (ISBN 9789176795439), which received it’s finale earlier this year with Höstregn (ISBN 9789176795842). 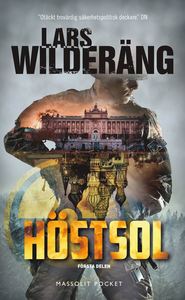 As with the earlier series, the books describe how an escalating crisis eventually evolves into war, and how the Swedish Defence Forces and general society respond to the challenge. In typical Clancyesque fashion the narrative follow a number of persons at different positions whose lives are affected by the war in one way or the other. The characters enter and exit the story throughout in varied fashions, and with the exception of a handful of the main cast most remain rather flat to the reader. The decision is understandable, this is a story about a major war, and to try and tell too many stories in-depth at once would quickly have made the books twice as thick as they are. Less well-developed side-characters feels like a fair trade-off to keep the number of pages manageable.

More disturbing is that especially in Höstsol a number of characters feel somewhat dumbed down. Yes Pjotr, you already mentioned that the whole of Gayropa is occupied by fascists, there’s no need to reiterate it at every turn. The portrayal of Swedish media is also a bit over the top in my personal view. These are largely the same issues that I disliked the most about Midvintermörker’s finale Midsommargryning, and they are especially tiresome as Wilderäng clearly is capable of writing interesting characters, Misja and major Bergäng being prime examples.

But to be honest these aren’t books read for the depths of the character gallery, but for the vivid portrayal of how a modern society copes with war, and for possible scenarios leading up to one. While not the first one to raise the topic, Midvintermörker was likely the single most important factor in popularising the ‘Gotland-scenario’, and in the same way Höstsol creates an interesting and plausible scenario for how a crisis involving Sweden could come about. Most fascinating here is the work performed to mask the beginning operations as something other than war, and while I won’t go into details to avoid spoilers, Höstsol’s strength lies largely in the questions raised around the politics and how ‘hybrid’ scenarios could be adopted to a Swedish context.

If much of Höstsol is a slow build-up to disaster, by Höstregn the reader is already in a full-blown shooting war. While the policy questions and study of international relations might not be as interesting, the quicker pace of Wilderäng’s war story makes the book the more enjoyable one from a thriller point of view. Still, there’s really no use in treating the books as two independent works, as the story is a direct continuation to the point that they need to be read together.

I am somewhat torn about my final verdict. I still feel that Midvintermörker is Wilderäng’s strongest foray into the techno-thriller genre, but Höstsol is (by now at least) considerably more thought-provoking from a national security point of view. There is a tendency in both Finland and Sweden to have a rather sharply defined view of what wars are and how they start, and Wilderäng’s latest works serve as (enjoyable) reminders that by now we should have learned to expect the unexpected when it comes to Russian military planning.