One of my avgeeky soft spots is high-performance turboprops, so when Harpia announced that they were doing a book on the Tucano, it immediately caught my attention. 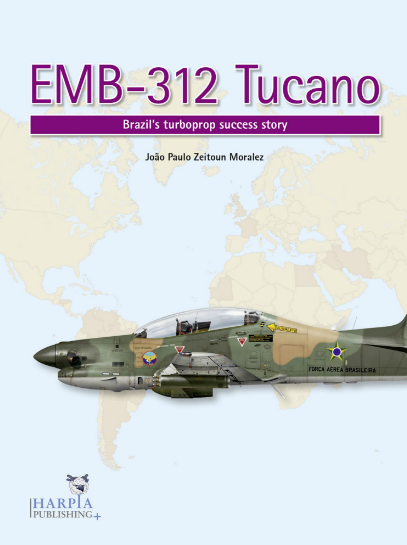 Today the idea might be considered rather mainstream, but when the Tucano was born it still took quite a bit of outside the box-thinking to go for the idea of a near-jet experience in a prop plane. It is this combination of daring can-do attitude from the company and designers coupled with the engineering ingenuity it took to make it all work that lies at the heart of why I like this class of aircraft. However, truth be told I knew preciously little about the Tucano, and even less of the backstory of how Brazil suddenly appeared as a recognised exporter of high-performance training and COIN aircraft.

João Paulo Zeitoun Moralez starts at the beginning, detailing how the idea of a Brazilian aviation industry was born, and how a small team of engineers started producing basic indigenous designs in parallel to license production. Then when the opportunity presented itself, Embraer was ready to push a brave new design for a sudden Brazilian training requirement. Interestingly enough, the book details how the aircraft evolved through multiple concepts, and the political game behind it. After this the subsequent marketing push and Brazilian service is described, before attention briefly turns to the Short’s S.312 for RAF (as well as Kuwait and Kenya). After this comes a go-through of all 16 countries to which the aircraft was exported (one of the chapters being dedicated to US civilian operators), before discussing the roadmap and development work that led to the EMB-314 Super Tucano. The book is then rounded up with some impressive appendices, featuring technical specifications for both EMB-312 and S.312, colour profiles, ORBAT’s, and production lists listing individual fuselages. Note that the EMB-314 Super Tucano is not covered in the book, as it will receive its own volume in the (near?) future.

It is easy to be enthralled by the book. As a mechanical engineer turned project lead, I found the description of the work leading up to the operational debut highly fascinating. The topic is often glossed over in similar works in favour of more pages dedicated to operational use, but there certainly is an interesting story to be found here as well.

It is the completeness that really makes the book shine. Going through all stages from the birth of the Brazilian aviation industry up until and including the operational service for all operators to the very end of last year. One thing worth mentioning is that the export orders are given in alphabetical order and not chronologically, starting with Angola and ending with Venezuela. This means that it’s easy to look up a given country, but when reading through the first time it does at times feel like you are lacking parts of the puzzle. E.g. the Iraqi aircraft were mentioned in both the Egyptian and the Iranian chapters, before you eventually get around to getting their own story in the chapter on Iraq. I can see why they have done it this way, and it sure helps next time I pull the book out of the shelf to look up Peru, but for general readability I would perhaps have preferred them in chronological order.

The appendices are also of high quality, with the full-colour artworks including both early concepts (black and white), prototypes, and 60(!) operational aircraft representing all 16 operators. These are absolutely top-notch, both when it comes to the artistic work and the aircrafts picked, as they show an interesting mix of standard and special paint jobs.

The book feels big without being oversized when read. The size is just below A4, and with 256 semi-gloss pages it weighs in at just over a kilogram. When first opening the shrink wrap I felt slightly worried that the spine wouldn’t keep together, but I am happy to say that it held together without any problem despite my reading not being of the most gentle kind, including quite a bit of carrying around from place to place and leaving it flung open for prolonged times.

The single issue which stuck in the back of my mind is that while the facts, storytelling, and illustrations are all very good, the editorial work is unfortunately not quite at the same level. There are a few typos, and some sentences give a feeling that they are either translated or written by a non-native English speaker (big caveat that I myself is not a native English speaker, so this last one might be my mind playing tricks). These aren’t anything close to deal breakers and doesn’t detract from the interesting story, but I was somewhat surprised that, given the high quality of the other areas of the book, the editorial work felt more 95 than 100 %.

Having said that, I am not going to lie: I absolutely love this one. Last time I reviewed a Harpia-book it was the Russia’s Warplanes-volumes, which I liked very much, but which were more of reference works than books to read cover to cover. This one is a comprehensive story of a single plane, and as such the reading value is significantly higher. The varied countries it has seen operation with is also adding to the interesting story, and a large number of those countries have used it operationally in combat. As mentioned earlier, the artworks are also absolutely fabulous, and certainly catches my imagination. Now, didn’t Hobby-Boss release a Tucano in 1/48 last year…?

The book was provided free of charge for review by Harpia Publishing.