Carrier aviation has always had a tendency to interest people. After all, flying aircraft of ships sounds crazy enough than one wouldn’t think it was a viable plan of operations if not for the very fact that a number of navies does so on a regular basis. Interestingly, quite a number of important changes have taken place when it comes to worldwide carrier operations in the last decade or so. This includes several new carriers being commissioned, and new aircrafts coming into service, making much of what is written on the subject out of date. 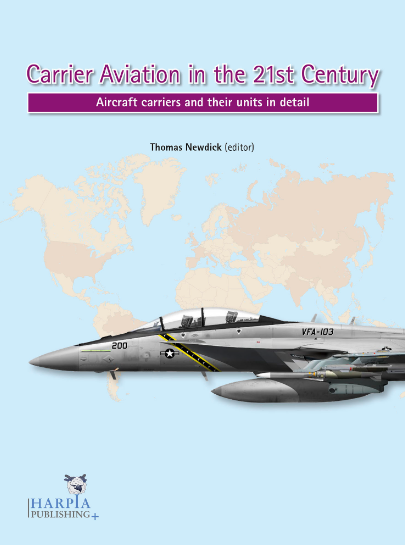 Enter Harpia’s Carrier Aviation in the 21st Century – Aircraft carriers and their units in detail. The book goes through all navies currently sporting a commissioned carrier and fixed wing aircraft, and with “currently” that means the end of 2017. In short, the Royal Navy and Queen Elizabeth is included, but the Thai Navy is not following the retirement of their Harriers. Navies with more or less suitable ships but not having fixed wing aircraft, e.g. the Japan Maritime Self-Defense Force, are left out.

Readers can, and most likely will, have opinions about this line. Some will undoubtedly feel that it is a stretch to include Brazil considering the state of the NAe São Paulo (ex-Foch) or the Royal Navy considering that shipboard F-35 operations are yet to commence. Others will likely argue for a inclusion of a number of big-deck helicopter carriers and amphibious ships which arguably sport more shipbased aviation than some of the smaller ‘Harrier carriers’. Personally I would have liked to see some discussion around the feasibility of F-35B operations from a number of ships that have been speculated to be more or (usually) less ready to handle the V/STOL bird, such as the Japanese Izumo-class, the Australian Canberra-class, and the Dokdo-class of the ROKN. Still, I get that the line has to be drawn somewhere, and the basis of who’s included and who’s left out is clearly stated, which is nice.

One interesting feature of the book is that it puts the carriers and their aircraft into context. While chances are you have read a text or two about the INS Vikramaditya and its MiG-29K’s before, the book does not only (briefly) discuss the history of Indian naval aviation to put the latest program(s) into context, it also explains the contemporary doctrine and what role the carrier plays in today’s Indian armed forces, the likely composition of a carrier battlegroup, and not only lists but describes all embarked aviation units, fixed and rotary winged.

More or less the same is the case with each and every country-specific chapter of the book. I say more or less, because every chapter is written by a country-specific expert (hence the ‘editor’ after Newdick’s name), and the setup and sub-headings vary slightly. While purists might find this irritating, I personally find it good that the authors have been given some leeway, as the unique situations in different navies are better served by getting more custom fit descriptions compared to being shoehorned into a ‘one size fits all’ template. I was a bit worried upon opening the book that the variances would be so big that the book wouldn’t feel like a coherent work, but having read it I don’t feel that is the case.

Over all the book is a very enjoyable read, though the Italy-chapter does suffer from the same kind of language-issues that I mentioned in my review of Harpia’s Tucano-book. However, I am also happy to say that the good points of the Tucano-book carries over as well. These include highly enjoyable pictures and top-notch full-colour illustrations, as well as excellent build-quality of the book. In fact, I am yet to manage to break any single one of my Harpia-books, and that include bringing an earlier review book along for a camping trip in the archipelago.

The gorilla in the room when writing about carrier aviation worldwide is the completely outsized role of the US Navy. In short, the US Navy fields more and larger carriers and carrier air groups than the rest of the world together. How do you tackle this, without the book feeling unbalanced? The USN does indeed get a longer chapter than the rest of the countries. However, US carrier aviation is also remarkably homogeneous, being built around two clear templates: the Nimitz (and now Ford) with a carrier air wing and the smaller amphibious ships with their aviation elements, and the number of flying platforms has shrunk considerably compared to the classic cold war wings. This means that there is no need to give ten times the space for the USN compared to e.g. the French just because they have ten times the number of carriers. This makes the book feel balanced, and laid the last of my worries to rest. The sole issue I foresee is that developments in carrier aviation is moving rapidly in several countries at the moment (USA, UK, China, India, …), and that means that parts of the book run the risk of becoming outdated quite fast. Still, that will be the case with any book on the topic released during the next five to ten years (at least), and there is certainly enough ‘longlasting information’ to make sure that the package as a whole isn’t going anywhere soon.

Compared to the Tucano-review which I was very excited for, I was somewhat more lukewarm to the prospect of what felt like yet another carrier book. However, the book surprised me, and certainly grabbed my attention. The chapters are deep enough to include plenty new information to me, and of such a length that it is easy to pick up and read through a single chapter if you suddenly have a need for a quick rundown of the current status of Spanish carrier aviation (yes, such things do happen to me occasionally). Harpia’s telltale illustrations and tables are also found in abundance.

Highly recommended for anyone looking for an update of carrier aviation worldwide!

The book was kindly provided free of charge for review by Harpia Publishing.