Skipper is a well-recognized voice in Swedish discussions on defence and national security. Following the questionable reporting on details surrounding the subhunt of 2014, reporting that now has been quoted in Finnish media as well, he wrote a blog post on his personal blog which I have received permission to translate into English. Any errors in the translation are fully my own.

I practically never write blog posts any longer, but sometimes I feel the demand to do so. The following is due to SvD’s damaging reporting on the submarine question published yesterday.

I will not in any way comment upon the substance of the article. The only thing I will discuss in this post is the unquestioning attitude of the media. Conclusions presented in headlines and introductions to articles are flat out damaging for Sweden and cannot be seen as anything but pure disinformation. Where then lies the problem?

The headline and introduction used by SvD is phrased in a way that a reader not familiar with the issue cannot be expected to understand in any way other than that there never was any foreign submarine activity at all in Swedish waters in October 2014. This conclusion is utterly incorrect. Even worse is the fact that all other media repeat this statement without further questions.

This narrative constitutes direct disinformation, and was quickly established through national Swedish media during yesterday evening, and soon all established national news-channels sported a rewrite of the article, none of which showed any signs of questioning the narrative. All featured the same or similar misleading and erroneous headlines. [Today Finnish media has also repeated the claims.]

Even public service in the form of Sveriges Radio and Sveriges Television did such rewrites in blind trust, and as such played their part in spreading disinformation. SR and SVT that are trusted to continue working in times of war and serious crises, and as such form “protection” against influence and information operations directed against Sweden.

Following a social media storm against this both SvD and SVT, as well as other media, have rewritten their headlines and introductions. The problem is that the damage is already done. The narrative is set, and the man on the street now lives with a picture that all that was written by SvD and the others were correct, and that there was no foreign submarine activity in October 2014.

This morning several editorial boards have responded and corrected their headlines and introductions (see below).

If media had bothered to check the facts before publication none of this would have had to happen. The facts on the ground have not changed since September 2015, something that SvD knows while still deciding to make a grand fuss about this.

To get the facts one can read the Swedish Defence Forces article from 23 September 2015 with the headline “Beyond all reasonable doubt“. Some extracts from the text (my bold):

The Defence Forces’ final analysis shows that, as was stated last autumn, it is beyond all reasonable doubt that the Swedish internal territorial waters were violated in the Stockholm archipelago in October 2014.

The basis for this conclusion is now a significantly larger material than what was available in the immediate aftermath of the intelligence operation [i.e. the subhunt].

Of the roughly 300 reports that came in approximately 150 has been analysed in further detail of which 21 were judged to be particularly interesting.

Following the analysis several of these have now received a higher classification compared to the earlier analysis. The combined evaluation based on the amount of observations in the area provide a very high level of confidence.

The observation that last autumn was judged to be of the highest level of confidence has been reevaluated. Here additional information have come to light that give this particular observation another explanation, and as such it is not included in the basis for the combined evaluation. Despite this the conclusion remain that through the analysis work it is concluded beyond reasonable doubt that the Swedish internal waters have been violated.

The conclusion that media should have identified is that the “news” SvD built its article on wasn’t part of the final analysis work and combined evaluation. This was obvious already four years ago, but still media tries to spin this to mean that this news should be taken as proof that there was no underwater activity.

As such, this is pure disinformation, and it is regrettable that next to all media without question jumped the bandwagon on this sensation piece. It would – as many have pointed out – be interesting if SR medierna [an investigative public service radio show] would look into this reporting and investigate it from the point of view of source criticism.

That SVT did a rewrite of the article without looking into the sources with a critical mind is particularly interesting as SVT themselves recently launched a campaign for increased media literacy and critical evaluation of sources.

Starting today, SVT launches a new campaign about the role of public service in the modern media landscape. The first film discusses the need for fact-based journalism.

The film “Hen out of a feather” [Swedish expression meaning to make a mountain out of a molehill] focuses on the great importance of fact-based journalism in a world where rumors easily become truths, and information risks being corrupted. Where the border between opinion and fact becomes ever more fluid, and the current fast digital media landscape contribute to making a hen out of a feather.

The campaign has also been heavily criticized, including by the comedy show Svenska Nyheter.

A significantly more nuanced text has been written by Mikael Holmström (DN).

Yet another meltdown in the reporting is made by Jonna Andersson (mitti.se), se below. 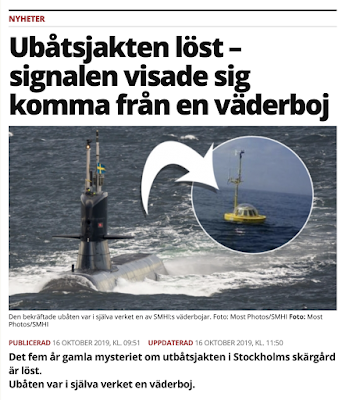