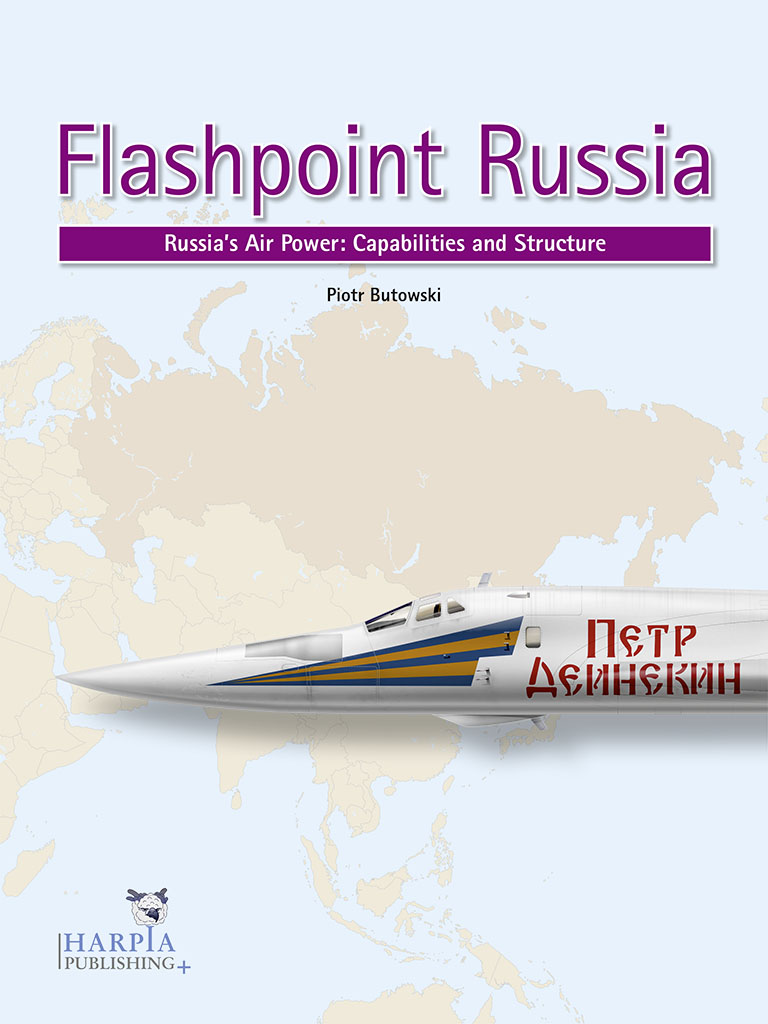 Some books are harder to review than others, and Flashpoint Russia (ISBN 978-0-9973092-7-0) is one of them. It’s Piotr Butowski. On modern Russian military aviation. What more do you really need to know? 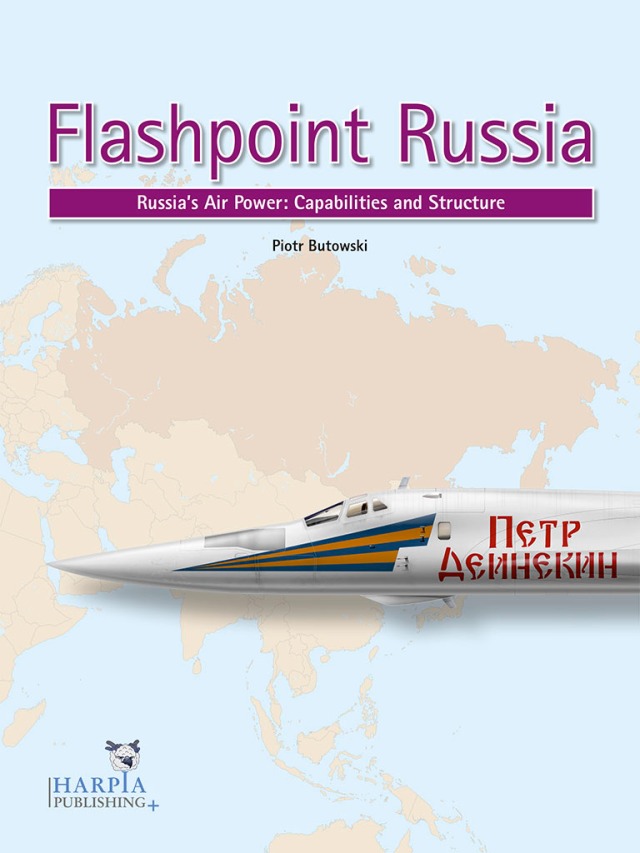 Okay, I realise this might not answer all your questions, so let’s dig into further detail.

This isn’t the first Harpia Publishing volume written by Butowski. I reviewed his books on their aircraft and air-launched weapons, and they are still my go-to references for anything related to the Russian Air Force equipment. However, when writing about the capabilities of the Russian Air Force (as well as Naval Aviation), knowing their equipment is just half the story. The other question is what the order of battle looks like, something that up until now largely has been a case of piecing together different sources and news stories. This is where Butowski’s latest steps in.

The book does start with a short overview of the history of the Russian military aviation post-Cold War, but it swiftly moves on to the main purpose of the book: a complete and well-researched order of battle for not only the Russian Air Force, but the Naval Aviation and the (limited) aviation assets of the three para-military services of the Federal National Guard Service (Rosgvardia), the Federal Security Service (FSB), and the Federal Guard Service (FSO). It should be noted that this means that all military and paramilitary aviation assets available to the Russian state are included, a big benefit for anyone analyzing the overall Russian capabilities. It must be said that given the relatively limited number of pages, the total stands at 142, it is a serious amount of information that Butowski has been able to cram into the book. Missing are however the civilian authorities that would be requested to assist the state, such as the aviation assets of EMERCOM and the Federal Customs Service. 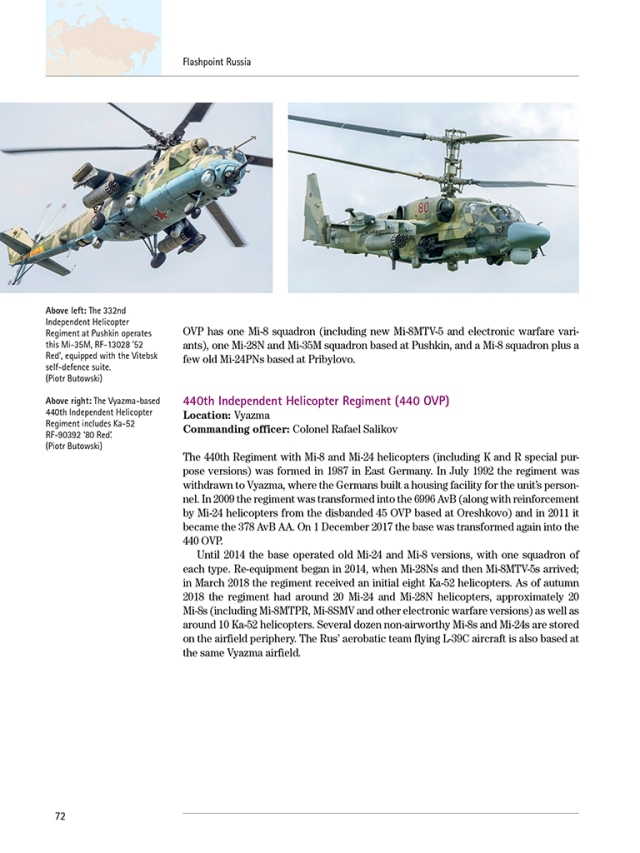 This isn’t a book for the keen scale modeler looking for walk-arounds of aircraft or numerous colour-profiles. Granted, the book does feature the abundance of high-quality pictures we’ve come to expect form Harpia, but it is a book you get for the text and the maps. The detailed information on regiment-level units is a treasure trove for anyone trying to understand what kinds of capabilities Russia are able to bring to any part of their vast country. It even include details such as the fact that the 3rd Independent Reconnaissance Aviation Squadron (3 ORAE) at Varfolomeyevka (commanded by Lt.Col. Sergey Nomokonov) has around 20 unservicable aircraft at their base! Perhaps the one minor gripe I have is that when discussing the traditions of the units, sometimes there are mentions of details such as “the renowed 3 IAP regiment”. At these times, I would appreciate if half a sentence had been dedicated to explaining why the 3 IAP is famous? But it is a minor issue. 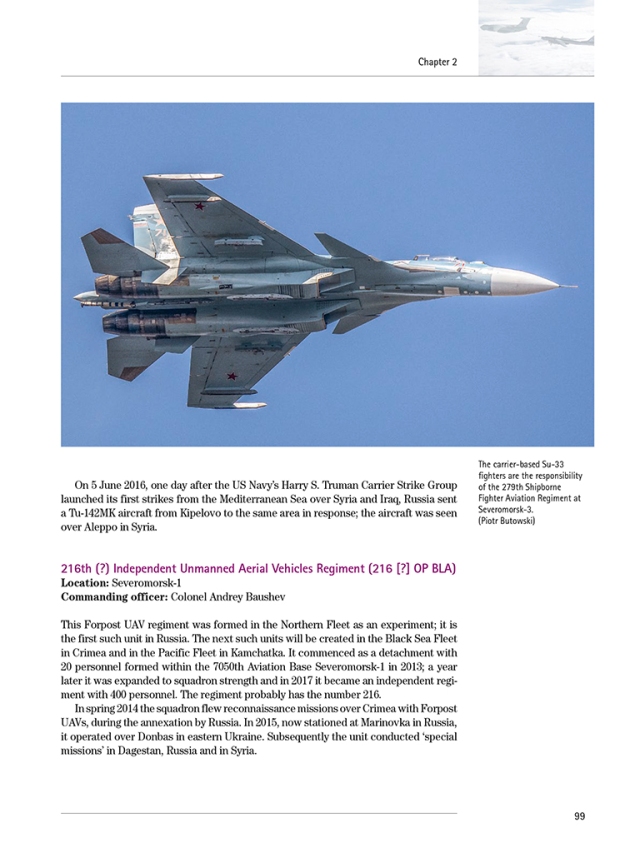 An interesting part is also the look at military aircraft acquisitions post-2000, that gets its own chapter towards the end of the book. Together with the overview of the structural and command changes in the early parts of the book, these ensure that the reader understands the detailed order of battle descriptions, as these provide a good framework for the main text.

The book is directed towards a niche readership, but so is this blog, so I have no issues highly recommending it! After all – It’s Piotr Butowski. On modern Russian military aviation. What more do you really need to know?

The review sample was received for free from Harpia Publishing for review purposes.