Harpia Publishing is one of those publishers who seems to have a more or less continuous stream of interesting titles coming out, but who’s books I’ve never actually have gotten around to trying out. As such, I gladly jumped on the opportunity when they contacted me and asked if I was willing to review their recent titles on the Russian Air Force. First out is something quite a bit out of the ordinary: Russia’s Air-launched Weapons by Piotr Butowski. 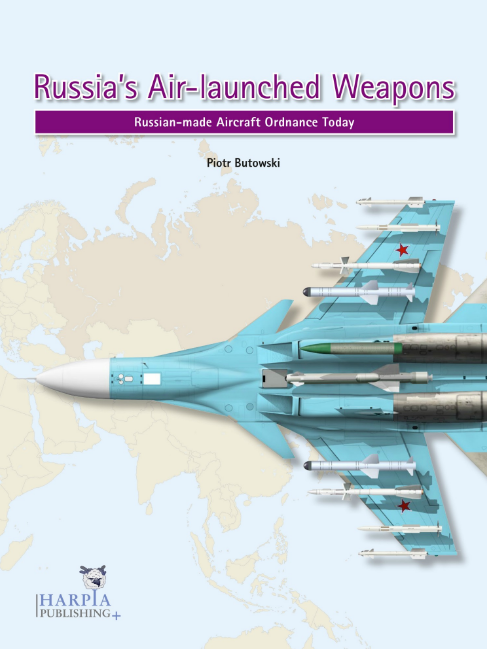 Compared to many western countries, Russia operate a range of different air-launched weapons. Partly this is due to the fact that while many design bureaus have been pushing newer designs, few weapons have been completely phased out in the recent decades. Instead, newer weapons have been bought in relatively small series, which are used alongside older designs. Russia has also kept a considerable number of ‘traditional’ gravity bombs, and contrary to the west, largely use these as ‘dumb’ weapons due to the difficulty of fitting them with guidance kits (contrary to the Mk 80-series, the Russian bombs are usually welded monoliths, making it impossible to change out the fins).

All this makes for a bewildering array of weapons, making the need for this book high amongst aviation geeks. A second group for which the title ought to appeal are national security pundits keeping track of what the Russian Air Force carries and uses in Syria.

The book uses a clear layout, going through the weapons category by category, including strategic weapons (nuclear bombs and strategic/theatre-level cruise missiles), tactical cruise missiles, air-to-air missiles of different classes, helicopter launched missiles, bombs, rockets, guns and gun pods, as well as naval weapons such as torpedoes and mines. Targeting pods also get an overview, though it should be noted that Russia has traditionally preferred fixed sensors instead of pods, and these sensors aren’t covered in the book. All currently operational weapons are covered, as well as those currently in development. An interesting aspect is that Butowski appears to have toured major Russian air and arms shows for years, providing a valuable source of information for projects which have at different times been in development, but which then have faded away or gone silent for some time.

There are some real gems in this volume. While I appreciate having a comprehensive overlook of the R-27 family or the Kh-31, my personal favourites where the more obscure weapons systems, such as the huge Klevok-V helicopter-launched missile, the S-13ALT radar decoy rocket, or the air-dropped mines, information on which is hard to come by.

The book is a rather thin soft-cover, being just under 100 pages, and I must admit I felt a bit disappointed when I first pulled it out of the postal package. Having read it my opinion changed, and it doesn’t feel like it leave things out due to its size. When I reached the last page, on the whole I felt I had gotten all information I had hoped for, with the possible exception of the chapter on naval weapons which I felt could have been a bit longer, as well as discussing at longer lengths to what extent some systems are in wide or limited use. Those are minor complaint, as said, the information on naval systems are hard to come by, and the book provide new information for me here as well. For the production figures, it is understandable that these are guarded secrets of the Russian Air Force. The level of illustrations is also good!

On the whole, it is hard to not recommend this book. As said, it isn’t overly thick, and the price (around 20 euros) is on the higher end. However, it functions as a very handy guide both to those wanting to ID what is hanging under the wings of Russian aircraft at home and abroad, but also for modellers looking into creating suitable loadouts for their models. The information seems solid, and especially considering the fact that this is in many ways an unique book in covering the latest development up to this year. Well worth a recommendation.