Shortly before half past two this afternoon, two ministers, a general, and commodore marched out to meet the gathered press to announce that the Finnish government had discussed the complete Pohjanmaa-class package, and that they had approved the signing of the contracts. The three key contracts will be signed next week in Turku, with the prime contractor Rauma Marine Construction, Saab for the combat system and integration, and with Aker Arctic Technology for the propellers and shafting,

While Minister of Defence Antti Kaikkonen certainly was correct when he at the start of the conference announced that he had “good news to tell”, today’s press conference was actually rather short on actual news. RMC has long been the sole contender for the shipbuilding contract, and shortly after the the Finnish government dissolved last spring it was announced that Saab had been downselected as the sole contender for the combat system and integration contract.

That was the words used by Kaikkonen to describe the combination of 9LV CMS, ESSM medium-range SAM, TP 47 ASW-torpedoes, and Gabriel anti-ship missiles. The decisions on key systems have been trickling in over the years, and together with the occasionally updated renders released these have made it possible to paint a rather good picture of the coming vessels even before today’s release of the key specifications. Still, it’s always nice to get confirmation. 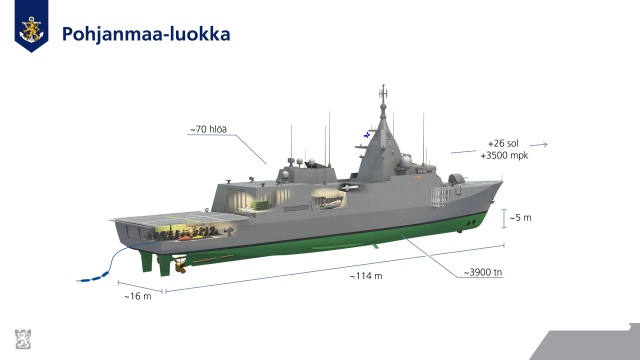 The key measurements of the vessel is approximately 114 meter LoA, 16 m BoA, and a draught of approximately 5 meters. The last part is a key design feature as the class need to be able to operate in the shallow Finnish archipelago, using currently existing infrastructure designed for the slightly smaller minelayers which it will replace. At 3,900 tons, it is heavier than most corvettes and frigates of a similar length. The propulsion is by twin ice-capable propellers, being specially designed for the project in cooperation between Aker and the Finnish Defence Forces since 2015. The key issue with the propeller design was the conflicting requirements of small diameter due to limited draught, slow turning speed due to the sound signature, and high vessel speed because, well, it’s a warship. Apparently the development work has been a success, because the top speed is given as 26+ knots. This is a respectable number for a vessel of its size, and only a few knots behind the slightly lighter but longer Valour-class frigates (MEKO 200) of the South African Navy, which sport a full CODAG-arrangement with twin shafts and a booster jet. This is well in line with the message from Minister of Economic Affairs, Katri Kulmuni, who described the pillars of the Finnish maritime sector as “specialisation and renewal”, mentioning low emissions and digitalisations as examples of the later. Buzzwords for sure, but not without the facts to back them up.

The decision to have RMC as the sole bidder was made based on the yard’s (predecessor’s) experience with naval vessels and most importantly to ensure domestic security of supply of maintenance and overhauls in times of crisis. The small size of the yard has been seen as a potential issue, with many open questions regarding risk sharing between the yard and the state, as well as ensuring that the yard can make a profit on the vessels without the state simply pouring excessive funds into the project. Based on the official lines from today’s press conference, everyone is happy and the yard has been able to confidently prove that they are able to handle both the technical side of the project as well as the financial aspects. It is seldom discussed, but in long and challenging projects such as shipbuilding terms of payment and company cash flow will be of significant importance, and it is no surprise that these apparently proved to be some of the most difficult parts of the contract negotiations. The end result is based on fixed prices (with index adjustments), with the payments to the yard being made at a quicker pace than usually. Major general (eng.) Kari Renko, deputy director of the FDF Logistics Command, was happy with the end result:

It is a good contract which safeguard the interests of the state.

The one cloud on the sky was that the shipbuilding cost was somewhat higher than anticipated, leading to an increase in the budget of the project from 1.2 to 1.3 Bn Euros (with the main weapon systems not being included in that sum). Still, the sticker cost of 325 MEur per corvette is low compared to many international projects, and if the Pohjanmaa-class will be delivered within the new budget it will be an impressive feat.

The one visible feature that has been cut from the vessel compared to earlier renders was the CIWS-weapon on the aft part of the superstructure, likely a 35 mm Rheinmetall Oerlikon Millennium Gun. It has now been replaced by twin Saab Trackfire RWS, a system that has turned out to be a favourite of the Finnish Navy. Depending on which weapon is mounted it can provide a nice increase in firepower against targets such as light craft, but is likely not quite up to the CIWS task against incoming missiles. Four MASS decoy launchers are also found, each covering one of the ship’s four quadrants. These might well come in handy, as while the signatures of the vessels are heavily reduced, they are not stealthy if compared to e.g. the Swedish Visby-class. This is as expected, and much in line with the FDF doctrine that a 85 % solution at half the cost is always worth more than a 100 % solution at twice the cost.

The renders include a few interesting details. A VERTREP-area is designated in front of the deck gun for helicopters to drop of their cargo. The number of VLS-launchers is up to 16 on the renders, which is double the number I personally was expecting. This could potentially be a case of fitted for but not with, with one eight cell-launcher being installed, and space reserved for a second to be dropped in at a later date. The Navy won’t tell what length they are, but suffice to say is that the vessels will be amongst the most heavily armed corvettes around (cue the ‘corvette vs frigate’-debate). And, no, we likely won’t be able to fire nuclear TLAMs any time soon (seriously, read the linked Twitter-thread if the question ‘but why…?’ comes to your mind right now). Two AUVs are found on the minedeck, one yellow and one orange. Presumably these are generic representations of the Saab Double Eagle Mk II and the Kongsberg HUGIN 1000, both of which are used in the minehunting role aboard the Finnish Katanpää-class. It would be to go a step too far to suggest that these will be a standard loadout on the class, but it is an interesting reminder about the fact that unmanned systems will likely play an important role in the service of the vessel class. In the helicopter hangar an UAS can be seen. It is a generic (?) quadcopter, but it can be pointed out that a Schiebel S-100 was recently tested by the Finnish Border Guard from their flagship Turva. As the Finnish Border Guard in many ways fill the role of Finnish naval aviation, and considering the proven track record of Siebel for, ahem, growing navies, I would not be surprised if the trials would result in S-100s being acquired for both Turva and the Pohjanmaa-class. Of particular importance would be if the UAS can be used for cueing the PTO 2020 (Gabriel) missiles, as they have a range significantly longer than the ship’s sensor horizon.

Check out a few impressions from our successful #CAMCOPTER S-100 flight trials for the Finnish Border Guard. We were selected because of our outstanding reputation as a proven and reliable #UAS for intelligence, surveillance and reconnaissance missions. pic.twitter.com/BlnIKlSA5C

Cdre Harju in his speech pointed out that the Pohjanmaa-class corvettes are “replacing vessels, but most importantly capabilities”. Besides the obvious ASW-, anti-ship, and air defence missions, the vessels will play important roles in territorial surveillance, ISR, mining, and as flagships. An interesting detail was that the operating costs and personnel needs will closely match the outgoing vessels, i.e. three large mining vessels and four FAC. Of the 70 persons in the crew, half will be professionals and half will be conscripts or reservists, another very Finnish solution. The full operational capability of all four vessels will be achieved by 2028, after which the Rauma- and Hämeenmaa-classes will be retired.

The final words of the day really ought to go to MoD Kaikkonen:

‘Multipurpose’ always mean compromises, but in this case these are good ones