The news that a Finnish 39E/F Gripen order would include two GlobalEye AEW&C aircraft has lead to varied reactions, some better argued (and more reality-based) than others.

The first thing to address is that the inclusion of additional assets and the claim that they make the fighter better is not proof of a design flaw on the part of the fighter. This is true for Super Hornet and Growler, and it is true for Gripen and GlobalEye. Secondly, the recent fighter competitions the Gripen has lost have mostly been smaller contracts where the 39C has lost out against aircraft such as surplus F-16s. The Swiss decision to disqualify the 39E based on the criteria of evaluation flights this summer is in no way an indicator of how the aircraft will perform in five to ten years when HX is set to achieve IOC. There simply isn’t today a clear evaluation available in open sources that would have been apolitical enough that we can say that we know how a 2030-vintage 39E stack up against Rafale F4, F-35A Block 4, and the rest of the competition. This becomes especially true once the particulars of the Finnish Air Force and the way it operates are taken into account. It should also be remembered that the GlobalEye was included in the offer sent in months ago (and prepared last year), so trying to tie it to recent events isn’t realistic.

When it comes to AEW&C in general it can be said that any fighter will perform better with support from one compared to without. That hold true even as data links and sensor fusion means that individual fighters get access to significantly better situational awareness. AEW&C provide the possibility of the fighters operating with passive sensors until an opportune moment. The idea that a fighter can work as a mini-AEW, most often associated with the F-35 but by no means unique to it, has some credibility but should not be confused with a real AEW. The reasons are two-fold: size matters, as Saab’s competition has been happy to point out over the years, and the bigger power and bigger array sizes of a dedicated larger platform will translate into better performance (i.e. longer detection ranges). The second reason is the dedicated mission crew (the ‘C’-component of the AEW&C). These enjoy ergonomic working conditions and dedicated tools and training to direct the flow of battle and relay important information to the fighter pilots, who are in a stressed situation and more susceptible to information overload. As a side-note, the spotter/shooter-teaming of fighters, surface ships, and airborne sensors which F-35 (spotter) and US Navy ships (shooter) has been demonstrating is also something that Saab has been studying. My understanding is that no other contry besides the US has yet to actually demonstrate the capability in practice. However, with the choice of Saab’s 9LV combat managment system for all Finnish surface combatants, the combination of Pohjanmaa-class corvettes, Hamina-class FAC, and JAS 39E/F Gripen fighters acting as shooters with a GlobalEye AEW&C acting as the sensor(s) looks tempting.

The question which undoubtedly caused most discussion was that of survivability. While the GlobalEye have some passive sensors, when it is operating it will be transmitting with it’s radar at a relatively high power. AESA radars aren’t as easy to locate as conventional ones, but if a GlobalEye is up in the sky, the enemy will likely know that it is there and have an approximate bearing on it’s location. However, the step from spotting a GlobalEye to actually shooting it down is quite a bit. To begin with the aircraft is equipped with significant EW-capabilities, but most importantly the range of the EriEye-ER radar allows it to sit back quite some way from the action. This has caused some discussion about whether the strategic depth Finland has is enough. The answer is that if Finland has any kind of own fighter presence in the air it should be. To better get a picture of the situation, let’s temporarily forego my principles and draw some circles on a map.

All the normal caveats apply. Circles on a map should never be treated as the objective truth. These are examples of ranges, the eventual detection and weapon distances will depend on a huge number of factors. However, in this particular example I do feel that this aid somewhat in understanding the distances at play.

To our aid we’ll bring in CMANO, which is widely regarded as the best tactical/operational level air and sea warfare simulator available to the general public (enough so that it has a professional edition on offer). Again, the circles aren’t exact because OPSEC and the laws of physics, but they are good enough for our purpose. The scenario used is named Code Name: Red Island, 2016, and feature a Russian amphibious assault on the Åland Islands. That is partly irrelevant, because we will simply use it to look at a few examples of sensor and weapon ranges.

Here we have a number of ground based surveillance systems. For the Russians the white fat dotted line represents a Kasta 2E2 radar (NATO-designation ‘FLAT FACE’), which is a modern Russian long-range air surveillance system. The wider white dotted line is the S-200 associated 5N87 ‘BACK NET’. Remember that the earth’s curvature will cause significant shadows at longer ranges. The two Finnish Air Force bases are Tampere-Pirkkala and Kupio-Rissala. Note the orange circles designating Finnish SAM-systems, mainly the NASAMS. Note that even in a best case-scenario from the Russian point of view, they have no picture of what’s happening over the Finnish west coast coming from their ground based systems.

Here we bring in the fighters. In this case we have a number of Russian Su-35S, featuring the powerful Irbis-E PESA radar. From the Karelian ishmuts the fighters could theoretically spot Finnish fighters taking-off from Pirkkala and Kuopio, roughly corresponding to the 5N87, but as the radars are airborne they offer a better coverage of lower altitudes. However, a key point here is the significantly shorter orange circle, which is the max-range of the R-27 missiles the Su-35 (and other Russian fighters) are armed with. 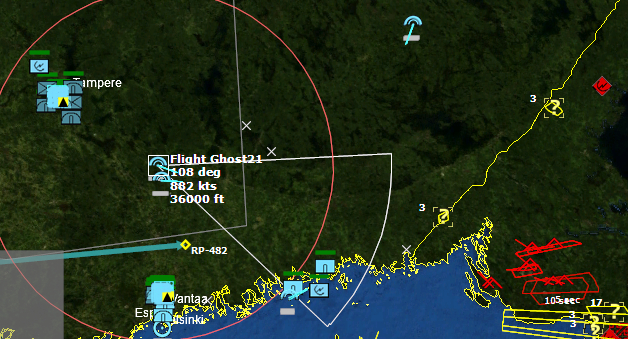 Enter corresponding picture from the Finnish point of view. The white sector is the search area of the legacy-Hornet’s AN/APG-73 radar, with the orange circle representing the max range of the AIM-120C-7 AMRAAM.

Here we bring in the stand-off sensors. East of Gotland we have a Russian A-50U ‘MAINSTAY’ AEW&C aircraft, flying circles approximately 200 nm south-southwest of Turku. Note the huge search range, with the dotted white circle almost stretching all the way to Vaasa despite the aircraft sitting quite far back. Naturally, if Finland would have an AEW&C sitting over Vaasa, one can easily imagine a similar circle stretching down to Gotland (remember, what you actually see depends on the radar-cross section and EW capabilities of the target).

The other interesting aircraft in the picture above is the C-295 Dragon Shield SIGINT/ELINT aircraft which sits over the Gulf of Bothnia on a southbound course. The passive sensors have picked up the emissions from the Russian squadron which is still quite a bit south of the Åland Islands. As is nicely illustrated, the bearings to the ships can be quite well read from the passive sensors alone, but judging range is significantly harder.

What then, if anything, can be shown by consulting a high-fidelity computer game? The most important point is that while Finland might be narrow, it isn’t indefensibly narrow even from the air. There is still ample of air space left for stand-off sensors before we start intruding on Swedish territory (with that said, having access to Swedish air space would certainly be a plus). It also shows the huge benefit of having an airborne surveillance radar, especially once the radar shadows found at lower altitudes are taken into the picture. It should also be remebered that the Global 6500 has a ‘high-cruise’ of Mach 0.88, which means that if an enemy fighter got through, the GlobalEye would have a decent chance of if not exactly outrunning the enemy, then at least keeping the distance until the fighter needs to head back home. As such, with the current arsenal found on both sides of the border, I believe it is fair to say that the GlobalEye would be rather survivable once in the air (as long as the total collapse of the Finnish Air Force is avoided, but if that happens things are seriously going south in any case). Which brings us to a more important point.

Two is a small number. The current reliability of business jets means that in peacetime it should be enough, but it leaves next to no room for operational losses. While the aircraft are rather defensible once airborne, their high-value means that they need protection while on the ground. A nightmare scenario would see them being taken out in the opening salvo of a war, either by long-distance weapons or special forces. A prime example is the 2012 terror attack on Minhas AFB in Pakistan, which crippled the country’s fleet of four Saab Erieye aircraft, leaving one destroyed and two damaged. Still, even a single GlobalEye would provide extremely valuable service to all three services in case of a conflict, and not having valuable stuff because someone might destroy them isn’t really a workable solution in war. The obvious solution here is closer integration with the Swedish AEW&C fleet, which likely will transfer from ASC 890 to GlobalEye at some point in the medium term, which would give higher redundancy in case either party suffer combat losses.

One last issue which need to be addressed is the possibility of extremely long-range missiles being used to target the aircraft from stand-off ranges. Currently this is a capability that Russia lacks, with the longest range missile in any kind of service, likely IOC, is the K-37M carried by the MiG-31BM long-range interceptor. It is envisioned that this weapon would also be carried by other fighters, but currently this does not seem to be the case. The weapon has a 200 km range from a head-on position ‘against some targets’. This is much more than a R-27, but the actual operational range is likely significantly less than advertised. A newer missile is in development for the Su-57 under the designation Izdeliye 810. The design has apparently beaten the competing K-100 (based on the second stage of the 3M83 missile from the S-300V), and the range will be in excess of 300 km. Passive homing on (fighter) radars will reportedly be a feature in the future. Coupled with the stealth characteristics of the Su-57 allowing the launching aircraft to get closer before it is discovered, this could potentially be a threat. However, considering the issues encountered with the development of the Su-57 and other air-launched weapons the final performance is a major question mark, as is the schedule for when they could enter operational service. China has a corresponding ‘AWACS’-killer in the form of the PL-X project, which was test-fired in November 2016 from a J-16. The weapon reportedly also is in the 300 km class. While further along than the 810, it is unlikely that it will ever make a showing around the Baltic Sea. In any case, very long range missiles won’t change the equation, but rather will alter the numbers involved in a significant but not revolutionary way.

This segways nicely into the most important point: to accurately forecast the impact of developments such as new weapons over the next few decades is difficult, and this is just one aspect that needs to be evaluated. Future-proofing HX for the 2050’s is hard, with key questions such as sensor development versus stealth being extremely difficult to evaluate. However, the GlobalEye (and corresponding systems) are likely to maintain their relevance over the decades. Will a Gripen backed up by a GlobalEye beat an F-35 without AEW&C support? By 2021 we should have the answer.

10 thoughts on “Survivability of a Finnish AEW&C”