The Swedish Armed Forces today did a decent attempt at upstaging Boeing’s PR-coup last week by casually dropping some major news seemingly as an afterthought, when they today announced a joint assault rifle procurement between Finland and Sweden which will kick off in September:

In September another procurement relevant to many within the Armed Forces. Then it will be determined which firearm will replace the AK5 [FN FNC]. The new firearm will be bought together with Finland – which means that in the future the two countries will use the same assault rifle.

The obvious issue: Finland is not currently in the process of acquiring a new assault rifle, following the rather recent upgrade of the current RK 62 to the RK 62M-standard.

But let’s start from the beginning: two years ago the Swedish Armed Forces outlined a plan to introduce a new “firearms system”, intended to replace the personal weapons of their soldiers. This included both assault rifles currently in service (the older H&K G3 as well as the newer FN FNC, AK4 and AK5 respectively in their Swedish designations), as well as the current AI Arctic Warfare/L96A1 sniper rifle (Psg 90) and the FN Minimi (Ksp 90). The plan is also to acquire a designated marksman rifle, a role which currently is filled with scoped assault rifles. The budget for the project would run from 2021 to 2030, with the major procurements being made starting 2025. 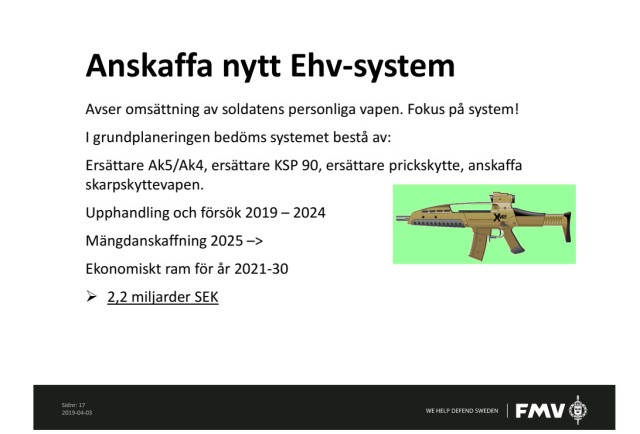 A year ago, the Finnish Defence Forces officially announced that they are acquiring a new weapon designated K22 from Sako. The key thing to notice here is that the weapon is a semi-auto in 7.62 NATO, made by a company famous for only doing bolt-action rifles for the last quarter of a century. The weapon would be delivered in two different configurations, as a sniper rifle and as a designated marksman rifle, differing in the equipment it comes with. The weapon would be a clean-sheet design, but based on “popular solutions”.

Now, you don’t have to be a business major to imagine that for Sako to bother looking into autoloaders they might have some plans for manufacturing more weapons than what the FDF might require for their snipers and marksmen. I would be highly surprised if their sights aren’t set on the 200,000+ weapons that will be replaced once the FDF starts retiring the RK 62M sometime in the 2030’s. The K22 might provide a nice development path into the world of ARs, from which to scale down into lighter calibre.

Crucially, the Swedish Defence Material Agency (FMV) has been closely following the Finnish developments, and this eventually led to the signing of an Memorandum of Understanding between the countries last month with regards to exchanging information on firearms and their technology, with the development of the K22 being mentioned in the press release by the Finnish representatives.

The Finnish inspector for the infantry, colonel Rainer Peltoniemi, noted that:

We’ve found that Finland and Sweden have very similar capability requirements, development schedules, and goals, meaning that cooperating is very natural and appropriate.

What has then gone “wrong”, if one country thinks they will be buying a common assault rifle in September? There are two possibilities:

One is that the terminology has been lost in translation. The current designated marksman-ish weapons of the Swedish Armed Forces are coded AK for “automatic carbine” in the Swedish designation system, a designation used regardless of weapon length. It is entirely possible that Sweden intends to buy the K22 in September, and designate it locally as AK-something (Ak6 is one possibility, though e.g. the H&K 416 and 417 which have been acquired for SOF usage are designated AK416 and AK417, so AK22 might be another guess). This would then have been the news that the Swedes happily announced to the world today.

The other is that there is a silent agreement to launch a joint project for a larger number of weapon systems, possibly including the whole Swedish “Nytt Ehv-system”-program as well as Finnish replacement of RK 62M and potentially some other weapons as well. This was now unfortunately slipped into the press release by someone who didn’t know it was supposed to be under wraps.

Hopefully it was a case of the former, but I guess we’ll know by September.

The text has been updated, and it is now made clear that it is indeed the complete New Firearm-project that will kick off in September, and that as a part of this project is to look into whether part of the program can be handled together with Finland. In short, no decision on common weapons just yet, but a Swedish K22 order in late 2021 or early 2022 wouldn’t exactly be surprising in my opinion.