After something of a slow start, Boeing kicked off their HX-campaign with a bang last year, bringing two Super Hornets to both major Finnish air shows. One of these was the classic VFA-103 ‘Jolly Rogers’ CAG-bird, while the other was from VFA-143 ‘Pukin’ Dogs’ and played the role of Block 3 demonstrator at Seinäjoki air show. This was followed up with a visit to Tampere-Pirkkala AFB where the fighters were shown to the Air Force’s Air Combat Centre. 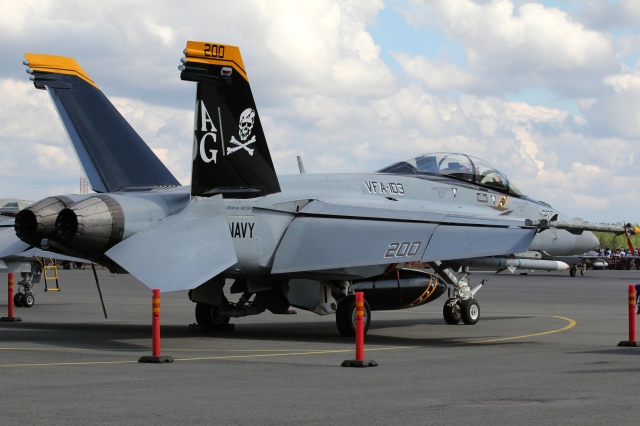 Since then it has been an eventful year for Boeing’s ‘Rhino’, with the US Navy having signed a contract for 134 new F/A-18E/F Super Hornets over the next few years. These newbuilds will be of the Block 3 standard from the get-go, and will be produced at a production line in the company’s St. Louis factory. At the same time, another 450 fighters will be upgraded during the coming ten years from Block 2 to Block 3 standard, with the work taking place both at a second production line in St. Louis as well as in San Antonio, Texas. Having several scalable production lines is a conscious decision by Boeing, who likes to have some headroom available for added Super Bug-production.

The long-awaited Kuwaiti order was mentioned as a category of its own, and was finalised today, a few weeks after the interview.

While the Rhino is sometimes decried for its lack of success on the export market, it is important to remember the scope of the US Navy orders. While the Eurofighter consortium is rightfully proud of the almost 500 aircraft in service throughout Europe, the recent Block 3 orders means the US Navy alone will outnumber those, with a total of 584 Block 3 Super Hornets to be operated by the service. To this number then comes 36 Australian and now 28 Kuwaiti fighters.

Having the Block 3 finally confirmed and fully funded with the production lines open well past the 2025-mark is significant for Boeing when it comes to HX. The Block 3 will give the aircrafts a 9,000 flight hour airframe, but the big change comes to the combat ability of the aircraft. The new wide-area multifunction display will create what Boeing calls “the most advanced cockpit” currently operational, and the TTNT (Tactical Targeting Network Technology) will make significantly increase the amounts of data transfer possible over the data link. TTNT is an example of what used to be niche technology on the EA-18G Growler being transferred to the baseline Super Hornet. Significantly more processing power is also in the works, which will facilitate a much quicker upgrade cycle going forward. The addition of conformal fuel tanks, the first HX contender to sport CFT’s, will also provide a big boost by allowing the aircraft to go faster with the same fuel load, or alternatively carry more weapons for the same range (a third option which is more interesting from a carrier viewpoint than for Finland is getting even more range out of the aircraft by using both CFT’s and drop tanks).

Something Boeing talks openly about is stealth, though their angle is rather different from that of certain other contenders. The IRST included in the Block 3 is “counter-stealth technology”, while the talk about fifth generation fighters is a “marketing scheme”. The decrease in radar-cross section of the Block 3 compared to Block 2, which has received significant coverage from some, is rather modestly described as “a little bit more coating”.

The HX competition and the Finnish hosts receive high marks. The competition for HX might be fierce, but both the Finnish Defence Forces and the Finnish MoD are “very transparent”. On the whole HX is both “fair”, “well-run”, and “documented in all the right ways”. And going through the HX-ladder of requirements, Boeing is confident that they will pass with flying colours.

We can prove life-cycle costs on mean-time between failures and so forth. Real data, not engineering reference data and assumptions.

Notably, due to the US openness when it comes to budget numbers, the flight hour costs are open information (usual caveat for different operating environments and budgeting methods apply). Hovering around 9,000 USD per flight hour, the cost for the Super Hornets have been lower than that of the aging legacy F/A-18 Hornet in recent years. At the same time, the F-35 and Eurofighter both aims for ‘F-16 like levels’ within the next decade, but neither are there quite yet (the F-35A currently needing a 38% cut in operation and sustainment costs to reach that target).

We want to continue that relationship [with Finnish partners]

One of the real trump cards of Boeing is their current close cooperation with the Finnish authorities as well as with the Finnish industry. Maximising industrial cooperation with Finnish partners might prove to be a challenge for some, but Boeing has already been there. Contrary to normal procedure the MLU2 of the Finnish F/A-18C/D Hornets were performed locally by Patria and not in the states, a point raised by Boeing. Even more importantly, Boeing’s offset responsibilities in conjunction with MLU2 were met either on time or early.

Crucially, by now Boeing understands the Finnish business and administrative culture to an extent unmatched by any of the rivals (with the exception of Saab), having dealt with the customer on a continuous basis for the last two decades. The current sales organisation even include some veterans who were part of the winning team last time around. While the capabilities of the offers will be the determining factor, there is no denying that understanding how to present those capabilities to your customer plays an important role in dealmaking.

4 thoughts on “On Rhinos and Growlers”